The Christmas Eve midnight service at Midway Community Church was the best possible night for a date. Lighted with candles set on the sill of each stained-glass window, the sanctuary was full of people, yet remarkably silent.

And those candles didn’t merely glow, for the towering windows didn’t seal completely, and each wisp of cold December air that snuck inside invited the flames of the candles to dance. And they accepted. The light, then, was alive. And its flickers made the night even more magical.

For thirty delicious minutes, a guy could sit with his girl in close quarters on a wooden pew smoothed by generations of worshippers. Decades of derrieres. Thighs comfortably conjoined. Hands perfectly positioned to be inched … over … and clasped.

This service on the holiest of Christian nights was not meant to be romantic, but Lord, a guy might pray every day not for salvation, but for these thirty … delicious … minutes. With her.

But he wasn’t with her. Glenn was seated in close quarters, but not with the prettiest girl in high school—the girl of his dreams … the girls of his prayers—but with the guys he’d grown up with.

The two pews down front were the domain of the church’s youth group. Required to attend Sunday services in order to take part in bowling or a movie or whatever the group did Sunday evenings, the teen-agers showed up, and they sat with each other in the second and third pews.

Throughout the year, the front pew was left empty for two reasons. One, it was where the deacons sat temporarily when they gathered at the altar to divvy up the offering plates. But also, anybody sitting on the front pew would be completely exposed, so that choir members—and Preacher Ted—would be able to see any note-passing or knee-poking.

But on Christmas Eve, even the very front pews were filled. Family members from out of town blended with backsliders, who came to church just once a year, to increase attendance tenfold. And for the most part, the out-of-town crowd was not given to knee-poking.

Yet for Glenn, surrounded by hundreds of worshippers, it was a crowd of two: himself and her. She was in the second pew, and he was in the third. And it was driving him mad.

It’s the curl of her hair, he decided.

Seated directly behind her, Glenn had a fantastic view of her hair. Brown and lush—lush 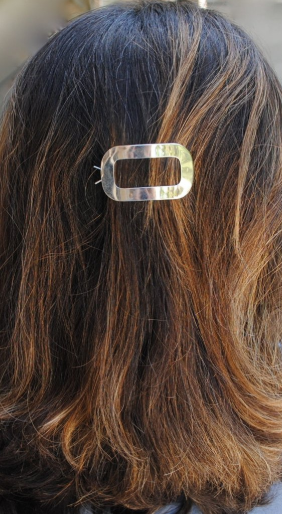 was a good word for it, he thought—it cascaded in front of him …  almost for him. She had pulled wide strands from near her face and gathered them in the back with a silver clip.

He tried to remember the word for the clip. He didn’t think it was a barrette, but a clip had more of a squeezy action, and he couldn’t tell if the silver thing was squeezed to open and gather up her hair. It wasn’t a pin; he was sure. Maybe it was a clip.

But the effect was marvelous. The two strands that Kasey pulled away from her face were a little bit lighter brown than the hair it joined in the back—the hair that cascaded in front of him. And those strands, as well as the rest of her lush brown hair, had soft, perfect curls.

Her hair completely hid the back of her neck, it was so thick. And it was long enough that it flowed past her shoulder blades and over the back of the pew in which she sat. Technically, Glenn decided, her hair was in his row, in his pew. He wasn’t sitting with her, but kind of, he was sitting with her hair.

Glenn had hoped for a different seating arrangement, especially tonight. For most of the fall, when both of them began their junior year at Midway High, Glenn had worked the angles.

He played all the angles and, for the most part, was successful. He spent quality time near her. And several times that fall, they had talked. Sometimes just a greeting, but often—well, at least five times—they had exchanged full sentences: opinions about a TV show or agreements about homework being hard.

One time in early November, Glenn almost mustered the courage to ask her out, like, on a real date to a restaurant in Lexington … or to a movie—just the two of them.

But it wasn’t just the two of them. Kasey was with Abner, and he was with the gods. Ab was muscular and handsome, athletic and artistic, intelligent and authentic. Ab was friendly, popular, and talented. He was adored as much by teachers as he was by his classmates—even the stoners loved Ab. He was perfect.

And Glenn was not.

At least he could sing, though. And when the congregation stood and joined their voices—without the organ—to sing “Angels We Have Heard on High,” Glenn unleashed his brilliant bass, sweetly singing (as it were) o’er the plain voices of his buddies beside him. And when he belted the bass line of the chorus—the extended “Gloria” prior to “in excelsis Deo”—it flowed like a counter melody … a solo performance of sorts.

And she turned and smiled. And raised her eyebrows a bit. At him.

The look and the lift lasted only a second. Literally, one second. But it was glorious. It was frickin’ in excelsis.

It was completely Christmas Eve.