What do you mean, new normal?

This two-word phrase seems to come up in every TV report, all opinion pieces, and most conversations. You’ll also see and hear variations, like “new abnormal” and even “abnormal new normal.”

After months of this COVID mess, I’d say the new has definitely worn off.

Researching the phrase “new normal,” I found several claims to its origination: after the 9/11 terrorist attacks, during a 2003 financial boom/bust cycle, and following the 2008 recession. The earliest citation, though, was from an article in December 1918, in the aftermath of World War I.

There’s lots of newness, but not much normality. “Normal,” you know, is what’s typical … routine … expected.

During the shutdown, I’ve been working from home. My team and I have created two issues of our magazine without laying eyes on each other except through computer screens. That’s been new for us, but I don’t call it a new normal. We’ll be back in the office in a month or two, and what became routine this spring might be a “remember when” story next year.

Also at home, my family started a small garden. We eat in every night. I wash a lot of dishes. I dig dandelions as soon as they reveal themselves. It’s new, but it doesn’t seem normal. And it’s not what I expected of 2020.

I didn’t read the 1918 article, but any new normal the world settled into back then didn’t last. It can’t. Technologies emerge, inventions appear, attitudes evolve, and disasters strike.

“Normal” is a rolling standard, an ever-changing acceptance of patterns, activities, and beliefs. It’s only natural that we seek firm ground—and take comfort in a predictable future—but it’s an ongoing search. Firm ground is natural, but then earthquakes happen. Pandemics hit. Jobs and livelihoods go away.

So what’s normal now? How do we regain our footing with work and friends and routines when the ground hasn’t settled?

How? We roll with it. We make do with less money and more stress. We cry or rant or zombie out, and we think about better days ahead, because that’s just our normal for now.

But those better days are coming. We’ll stop counting deaths and start moving forward, recalibrating our lives and, maybe, ourselves.

There will be new days, but there won’t be a new normal because normal never lasts for long. As soon as we get used to life, it changes.

So what’s normal is change. And life … is always new. 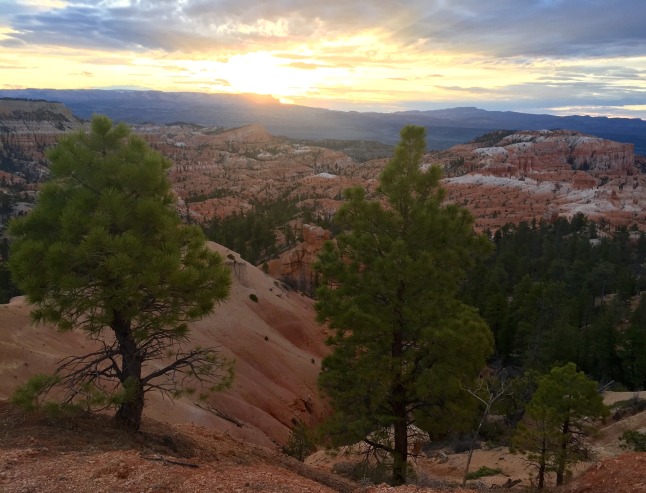 Each sunrise is new, but not normal. This daybreak at Bryce Canyon National Park in Utah was unique, with a never-before-seen interplay of clouds and colors shining light on a day of novel events and interactions.

When I first learned to drive—and for the next, oh, forty years—I was a bit impatient. And while I still get frustrated by slow vehicles in front of me, there’s one place I’ve become a more responsible driver: at the stop sign. 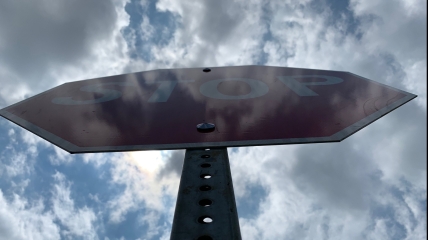 In particular, I’d get antsy while sitting at an intersection and waiting for a clear spot in traffic so I could make my turn and get where I was going. I mean, after you sit patiently for thirty seconds … a minute … maybe two, it’s only reasonable that you should be able to merge. It’s basically your daggone turn. Am I right?

What took me several decades to learn was that my desire to move forward doesn’t diminish an oncoming car’s ability to crush me. That’s simple physics, and I can’t really argue with science.

Even when my intentions are good and I’ve been waiting for “quite some time, now,” the only time it’s safe to turn is when the coast is clear. I don’t mean clear all the way to the next county, but clear enough that I won’t get T-boned on my way to dinner.

And that’s how I look at this coronavirus mess. I am really eager for everything to open back up so I can enjoy the fruits of our economy: restaurants, stores, movies, haircuts … the works. And Lord knows we all need to get back to work. We’ve waited long enough; it’s time, right?

While it’s possible that I can go back to work and earn money to spend at local restaurants and stores and barbershops without catching or spreading the coronavirus, it’s also possible that I will catch it. Spread it. Get killed by it. Kill others with it.

The trick, I guess, is knowing when the coast is clear. I don’t mean waiting until there’s no trace of the virus, but clear enough that I won’t get T-boned by a disease with no cure … one that’s still getting spread by people breathing.

I’ve gotta wait on the science.

I wish like anything we could end the quarantine, go back to work, and get back to living! But not when that damn virus is still unstoppable. Like waiting to turn into traffic, my desire to move forward right now doesn’t diminish the virus’ ability to crush me.

Until I can be reasonably sure that damn virus can be slowed down or stopped, I’m OK to wait just a little while longer.