The sport saves its biggest lesson for parents, though, because over and over, baseball teaches us the value of flexibility. As in don’t-make-any-plans-for-eating-or-sleeping flexibility.

I suppose the parents of kids who play indoor sports—basketball, swimming, volleyball, bowling, etc.—can arrange their lives with confidence, knowing that only the most catastrophic weather events will cause the game to move to a different day or time. You can nicely wedge a game into a well-planned schedule of work, meals, Netflix and sleep.

But baseball can string you along for days. On call. On edge. And this weekend, while the rest of America is celebrating Independence Day, we’re chained to our cell phones. We’re imprisoned by rain clouds.

It’s raining outside this weekend, and dang it, that’s where baseball is played. Football and soccer are also played outdoors, along with, say, pole-vaulting, but with those sports, you can muddle on during a rainstorm, pausing only for lightning, and continue play on a soggy field (or foam pad). But baseball, for all its eye-black bravado, wimps out after only a quarter-inch of rain lands on its manicured infield. (Note: Outfielders are on their own. For all baseball cares, outfielders can use swamp buggies and airboats to retrieve balls and return them to the infield.)

My son’s summer travel team, the Kentucky Rockers, is entered in the Supreme National 16U Ultimate Baseball Championship of All Times. (You pay extra for each word in the tournament title.) The 96 teams from at least that many states (right?) were scheduled to play on 15 ball fields in and around Louisville. Each team would get five games of pool play, which means playing all the teams in your pool, and the results would determine which teams advance to the elite eight* championship bracket, with tournament play determining the Supreme National Champion (etc.).

Our first game was on Wednesday, when the mighty Rockers defeated a team from Ontario 2 to 1. I missed that game, electing to go to work and earn money for new baseball pants, which routinely get torn and stained with embarrassing brown skid marks. Had I known the Canadian showdown would be the only sure thing during the five-day extravaganza, I might have skipped work.

We were scheduled to play our next two games Thursday morning, then one Friday, and another on Saturday to set the stage for tournament seeding. Since that victory over Team Canada, though—and I write this on Friday afternoon—Louisville ball fields have received anywhere from a half-inch to 2.5 inches of rain.

Remember what I said about a quarter-inch ruining a field. The rain has made a mockery of the schedule. “Haha,” the rain said, using the text lingo of today’s youth. 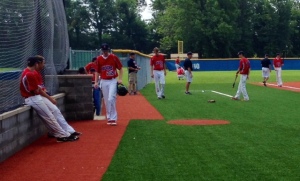 Even on a good day, baseball has lots of standing around.

The Rockers have been re-scheduled no fewer than 17 times—on an ever-changing series of fields—but we have yet to leave the house. You have to stay close to your car and baseball equipment, see, because makeup games are being scheduled every few minutes. With 96 teams, that means 1,318 players are on hold, as are 4,310 immediate family members—not counting 1,809 grandparents—and untold numbers of umpires, scoring officials and hotdog cookers.

I signed up for tournament text messages, so with each cancellation, rescheduled game, subsequent cancellation and further rescheduling, I get a text. In just the past hour, I got 43 dings. The tournament director has two bloody stumps where his texting thumbs used to be.

His latest message: “Saturday schedule being built as we speak. DO NOT go home.” I assume he is speaking to the parents from Canada. Those of us who live close to Louisville haven’t left home since Wednesday night, as I said.

Without baseball, there are other activities we might have enjoyed this Fourth of July weekend. There’s a patriotic concert in Lexington, fireworks in Midway, a street party in Versailles and a 5K run in Frankfort tomorrow morning. Heck, I might even have purchased hot dogs of my own and conducted a “weekend grill-out,” something I did before summer baseball took over our lives.

We set all of these things aside years ago, though, knowing that as a baseball family, we are subject to the whims of weather and the artful assignment—and reassignment—of game times and sites by a beleaguered tournament maestro. And that’s OK. That’s what we signed up for.

Because for all the inconsistencies that baseball delivers—from rain delays to wrecked weekends—it’s an experience that consistently delivers enrichment to our lives. For every minute that we juggle schedules and checkbooks to meet the demands of baseball, we spend an hour watching our sons ply the tools of baseball: dedication, discipline and teamwork.

So yeah, we’ve got to stay flexible, but our reward is just around the corner. It’s only Friday, and there are still two days of baseball awaiting us this weekend.

Oh wait—a new text just arrived. The tournament will be extended to Monday.

(*I use “elite eight” only conversationally here, as that term is copyrighted by the NCAA for use in its basketball tournament, AKA the road to the “final four,” which is also copyrighted. It’s sort of the “super bowl” of basketball. “Just do it.” “Coca-cola.” Any other copyrights I can infringe upon? “This sick beat,” anybody?)