A family vacay to Crescent Beach, just south of St. Augustine, gave me the opportunity to resume my running regimen. My mileage had steadily decreased to zero over the past half-dozen years, but the road to fitness would start in northeast Florida. I ran every morning during our mid-July week at a beachside condo. (Good thing, as I enjoyed a dose of key lime pie most every night.) On those hot runs, when I wasn’t thinking about dying, I thought a lot about the beach. 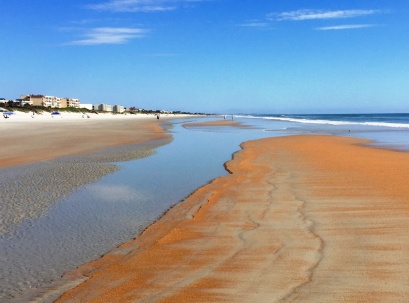 What is it about the beach that makes it so longed-for? I think it starts with the image. We love looking at water, whether it’s a creek, lake, fountain or river. And the bigger the expanse of water, the better. The ocean, of course, stretches forever on your right, left and to the horizon in front of you.

And when you involve the other senses: the surf’s methodical pounding, the aromatic salty air and the sea breeze on your face, the beach is flat-out intoxicating.

Do you think about buying a vacation home when you’re at the beach? Of course you do. Realistic or not, owning a place at the shore has to cross your mind as you lounge by the pool or stroll along the surf.

I have those vacation-home dreams while I run. As slow as I am, see, I get an extra-long look at each beachfront home. Some are cottagey and cozy, others are more modern. All windows and beams. I like the ones painted in pastels, with wide porches and a few Adirondack chairs. But if I were to ever buy a beachfront house, I’d want one with more bedrooms than my family needs because, as I’ve learned from watching House Hunters, your friends and relatives are going to visit you, like, constantly. So I’d need sort of a big house.

The former college football coach is, according to my son’s friend who lives here, building the enormous house a couple of miles north of our condo. It sticks out like a sore castle. And I don’t like it. I don’t like Steve Spurrier, is the thing. While he was aw-shucks and easy-going during interviews, he was relentless and cruel as a coach, making his Florida Gators routinely run up the score on Kentucky. I mean, he was probably thinking more about his team’s progress than his opponent’s ineptitude. And maybe it was nothing personal, but still … he didn’t have to humiliate the boys in blue.

On the morning of my longest run of the week, I found myself approaching the Spurrier spread. The massive structure was visible from way off, but I had never reached it on earlier runs. As I was plodding along that day, though—and picking a spot for a turnaround point—Spurrier’s house was maybe only 10 minutes away. It would be easy to use it later, when I drove into town, to measure the length of my morning run with the car’s odometer.

But I decided against it. “Hell with him,” I thought. “I’m not going to use that damn guy’s house as my running goal.”  So I turned around a few houses south of Spurrier’s palace.

When I turned around I saw two guys sprinting toward me at full speed. One was 20 or so, and the other might have been his dad, and they were flat-out flying across the sand, huffing and puffing from the effort. They blew by me in an instant, and I could tell by the sound of their footsteps that they immediately eased off the gas; their sprint was over. Twenty yards later it hit me: They were using me as their finish line. “Race you to that fat guy!” was probably what started their sprint.

I was glad I had turned back home—toward the speedsters—and deprived them of a target. I know it was nothing against me personally. But still, who needs that humiliation?

Slogging another 20 yards up the beach, it hit me: Maybe just being inside Steve Spurrier’s territory brings out the butthole in everybody.

Each day’s run was rewarding, but for the absolute best beach run of the week, I was a spectator.

If you’re familiar with beaches, especially the wide, flat type I’ve seen in the Carolinas and—this week—in north Florida, you know that the tide has a dramatic influence on the amount of beach that’s either exposed or covered by the ocean. When the slope of a beach is extremely gradual, as it is here, a little bit of incoming tide travels a long way up the beach toward the dry sand. Similarly, a receding tide backs away quickly, leaving a tightly packed sand that can triple the amount of beach that’s available for sun tanning, bicycling and strolling.

Even a flat beach isn’t perfectly flat, and a slight beach bump will retain a bit of water as the tide ebbs. These tide pools typically run in narrow fingers parallel to the shore, as pictured above. They hold water for 10 or 20 minutes after the tide has abandoned the sand that surrounds them. Just “up beach” of a tide pool is the hard sand that makes the best running surface … unless you’re a little kid.

Trying to beat the heat, I ran early in the morning, but not crazy-early. Folks would have arrived at the beach to shell or stroll. And of course, families with little kids would have already been up for hours.

One morning I trotted slowly—always, slowly—toward a family that had set up chairs and an umbrella, and each of them was engaged in a different project. Mom was wading in the surf, no doubt trying to detect rip tides; Dad was working to drive the umbrella deeper into the sand, making their day camp hurricane-proof; sister was picking up shells: coquinas and chipped cockles; and baby brother was on the run.

Maybe one and a half years old, the boy was motoring close to Dad as I drew near the family, but then he veered off in my direction. Rather than face certain death by entering my path, he headed for a tide pool. When he hit the warm, shallow water, he found beach bliss. Kicking up big splashes with each step, the boy gave a long, “EEEEEEEEE!” as he ran. The look on his face was that of delighted surprise … sheer joy.

The tide pool would soon dry up, of course, and the kid’s vacation would soon end. Mine, too. But for that one moment, happiness took over the lives and strides of two runners on the beach.